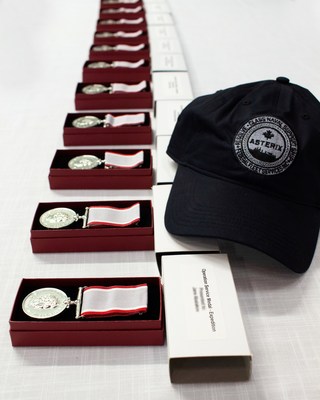 Operation PROJECTION shows Canada’s ongoing commitment to global peace. The deployment of sailors, ships and submarines shows how the Royal Canadian Navy (RCN) is ready to defend Canada’s interests around the world.

The OSM-EXP medals were presented to the crew by Commodore Rich Feltham, Commander Canadian Fleet Atlantic at a socially distanced ceremony on board the m/v Asterix in Halifax, Nova Scotia. Of the 52 recipients, 15 were from FFS’s long-term catering partner, Compass Services.

Typically, the OSM-EXP is awarded to CAF members. To be eligible for the OSP-EXP, service and direct support must be performed under exceptional circumstances and the person must have been deployed on a full-time basis for 21 days or more. The only civilians eligible to be awarded the OSM-EXP medal are members of the Public Service or Canadian civilians under contract with the Government of Canada (GoC), such as the 52 Asterix crew members.

In Canada, m/v Asterix is unique in being operated by both civilian and RCN personnel. Asterix is the product of Project Resolve, a GoC mandate to Davie Shipbuilding for the conversion of a commercial container ship into the RCN’s first Resolve-Class Combat Support Ship. Converted cost effectively in just 18 months to a military specified vessel, Asterix has been a resounding success since deployment in 2018 supporting countless operations as well as providing humanitarian and disaster relief worldwide.

Gilles Couturier, President & CEO, Federal Fleet Services
«We are proud that 52 Canadian seafarers from Federal Fleet Services and our partner Compass Group are being awarded the Operational Service Medal for their exemplary support to the Royal Canadian Navy during Operation PROJECTION in 2019. Working shoulder to shoulder with their RCN shipmates, they were deployed for a record 502 days during m/v Asterix’s first 18 months of operation. Our seafarers will wear this medal with pride. They have truly deserved it!»

Tim Allard, Captain, m/v Asterix
«On behalf of all the crew, we are very honoured to be recognized for this award. Personally, as the son of a World War II veteran, I have fond memories of seeing my father put his medals on every Remembrance Day and I will be thinking of him on this occasion.»

Commodore Rich Feltham, Commander Canadian Fleet Atlantic
«It is my honour to present the civilian members of m/v Asterix with the Operational Service Medal on behalf of the Royal Canadian Navy. This honour recognizes their service while deployed with our sailors overseas and I would like to personally thank the civilian members for their hard work and dedication in supporting HMCS REGINA during this operation.» 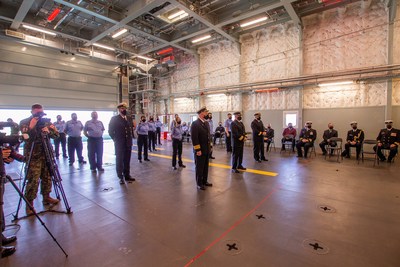 SKT to Participate in E3 2021 to Showcase Exciting Korean Games