WATERLOO, Wis., May 20, 2021 /PRNewswire/ — May marks not only National Bike Month, but also the second anniversary of Trek Bicycle’s #GoByBike campaign. The campaign has encouraged hundreds of thousands of riders to opt for travel by bike instead of by car. Riding a bike is not only a fun and healthy activity for kids and adults alike, but now there is a specific number of miles that can help you reach a new milestone on your bicycle: carbon neutrality. It’s called the Rule of 4301. When you replace your car or an emissions-emitting vehicle for a bike trip – to the gym, grocery store, work, or wherever you need to go – you are making a small contribution towards the carbon neutrality of your bike. If you ride a collective 430 miles – or a little over a mile a day for a year – that you would have otherwise used a vehicle for, you have saved the carbon equivalent of what it took for Trek to make your bike. Anything above 430 miles, and your bike is now carbon negative. 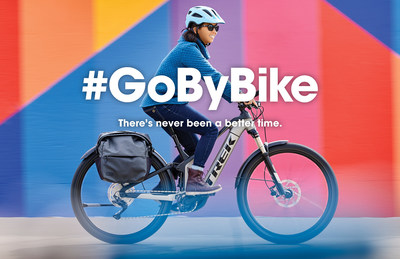 «When Trek launched #GoByBike last year, we wanted to provide a simple, actionable step for all people to normalize cycling as a viable transportation option. Since then, we’ve seen 2,000-3,000 people a week join the campaign and replace their car trip with a bike ride as more people turned to cycling, especially recently during the COVID-19 pandemic,» said Eric Bjorling, director of brand at Trek Bicycle. «Climate change is real, and we all have a responsibility – as individuals, communities, and businesses – to live more responsibly and respectfully. As a bike company, we produce a product that can offset the carbon emissions impact of its manufacturing through use. When people choose to #GoByBike, they are actively doing their part for the betterment of themselves and the planet.»

A new study conducted by the UW-Madison Global Health Institute and the Health Oriented Transportation Initiative (HOT), in partnership with Trek, examines the impacts of cycling on our health, society, and environment. The report reveals that in US metropolitan areas, less than one percent of trips are taken by bike. However, increasing cycling trips to just six percent will prevent around 100 premature deaths per year due to improved air quality from avoided vehicle emissions and provides approximately $1.1 billion each year in global benefits due to climate change mitigation. The findings also demonstrate approximately 20,000 deaths due to chronic disease like obesity in the US could be averted if metropolitan areas increased their cycling percentage. The White Paper with the full study can be viewed here, and additional information about the research can be found on the Trek Blog.

While the pandemic forced a moment of global pause, it also gave people time to return to – or discover – an activity they love: bike riding. Whether hitting the road on their own bike or using a bikeshare system like Trek-owned BCycle, ridership has reached new heights, reporting an increase in year-over-year bikeshare ridership in major US cities. In a new national survey conducted by Trek in May 2021, more than one-third (37%) of Americans reveal they have been riding a bike more since the start of the pandemic. While we all know bicycling is fun and good for mental and physical health, it’s more frequently being viewed as a viable transportation option, with 64% of Americans feeling that e-bikes are a good commuting alternative to cars. As return to office becomes more of a reality, 35% of Americans confirm that they plan to commute to work by bike some of the time.

For Americans, improving bike lane infrastructure across the US is also top of mind. According to the Trek national study, more than three-quarters (77%) of Americans feel that bike lane infrastructure in their city/town needs to improve. Trek is a founding member of PeopleForBikes, a non-profit group that works on the local and national level to lobby for meaningful change in bike infrastructure and safer, better rides for all riders. PeopleForBikes research recently found that more than 200 cities temporarily changed the layout of their streets amidst the pandemic and US city leaders have continued to position bikes as a solution to community challenges by building permanent bikeways. Trek is committed to furthering efforts to implement and improve bike lane infrastructure.

Participation in the #GoByBike campaign is simple: replace at least one car trip with a bike ride per week, post a photo of your ride to Instagram, tag it with #GoByBike, and invite your friends to do that same. For more information, please visit trekbikes.com/gobybike.

About Trek Bicycle
Trek Bicycle is a global leader in the design and manufacturing of bicycles and related products. Trek believes the bicycle can be a simple solution to many of the world’s most complex problems and is committed to breaking down the barriers that prevent people from using bicycles more often for transportation, recreation, and inspiration.

1 Methodology: The manufacturing of the average Trek bike is 174 Kg of CO2. A single gallon of gas emits 8.887 Kg of CO2. The average vehicle travels 22 miles per gallon. To offset the CO2 produced by the average number of miles traveled per gallon, a person needs to ride their Trek bike 430 miles.

Indiana Sportsbooks Show Resiliency with Return to Growth in May, According to PlayIndiana