OTTAWA, ON, Oct. 22, 2021 /CNW/ – For the first time since Bluenose appeared on Canada’s 10-cent circulation coin in 1937, the Mint has re-designed the image of the famous fishing schooner that Canadians have known and loved for a century.  This new design by Nova Scotia marine artist Yves Bérubé is being issued in celebration of Bluenose’s 100th anniversary.  To add to this historic occasion, the Mint is also launching Canada’s first-ever coloured dimes, featuring a touch of blue that brings to life the North Atlantic waters that Bluenose ruled throughout its illustrious career.  All other 10-cent coins manufactured this year with the classic schooner reverse design are also being doubled-dated «1921-2021» in recognition of this milestone anniversary. These exciting new coins start circulating as of today. 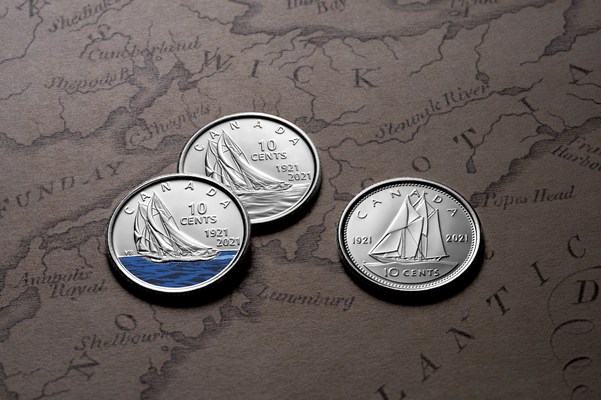 «When our circulation coins were re-designed in 1937 to celebrate Canada’s favourite national symbols, Bluenose inspired the design of the 10-cent coin,» said Marie Lemay, President and CEO of the Royal Canadian Mint. «Today, we are thrilled to commemorate the 100th anniversary of Bluenose with a new design that will circulate from coast to coast to coast as we reaffirm our pride in an enduring icon of Canadian know-how and innovation.»

Soon after slipping into the waters of Lunenburg Harbour from the Smith and Rhuland Shipyard in March 1921, Bluenose captured the hearts and minds of Canadians as the sleekest and fastest fishing schooner the world had ever seen.  In its first season, Bluenose both hauled in a record catch on the Grand Banks and brought the International Fishermen’s Trophy back to Nova Scotia. In addition to proving itself an outstanding working vessel, Bluenose remained undefeated in this racing series and proudly defended the title «Queen of the North Atlantic Fishing Fleet» over nearly 20 years of racing.  Bluenose also represented Canada on the international stage with memorable appearances at the Chicago World’s Fair in 1933 at His Majesty King George V’s Silver Jubilee in 1935.

«For 100 years, Bluenose has defined the spirit of Nova Scotia. The skill and teamwork of Nova Scotians made Bluenose a world champion, as well as one of the most famous ships in Canadian history,» said the Honourable Hon. Pat Dunn, Minister of Communities, Culture, Tourism and Heritage for the province of Nova Scotia.  «This commemorative Bluenose coin will remind all Nova Scotians how our connection to the sea and our innovative spirit has created our determination to succeed.»

On the reverse of the coin, artist Yves Bérubé’s tribute to Bluenose shows an angled view of the famous schooner, under full sail and heeled to port on the open sea. This dynamic portrayal of a ship that always left the competition in its wake can be found in both uncoloured and coloured versions, both of which are also double-dated «1921-2021».  A ground-breaking first for a 10-cent circulation coin, the coloured version features contrasting blue paint highlighting the deep waters of the North Atlantic.

The obverse features the effigy of Her Majesty Queen Elizabeth II by Susanna Blunt. In all, six million coloured versions and nine million uncoloured versions of the coin will begin circulating as of today.

Since January, the Mint has engaged in a year-long celebration of Bluenose‘s milestone anniversary through an extensive suite of collectibles.  We are adding to this commemoration today with new collector products derived from the commemorative 10-cent circulation coin.

There is also a Special Wrap Roll Set consisting of three 50-coin rolls.  Each roll features a different commemorative reverse design: the uncoloured and coloured versions of featuring Yves Bérubé’s anniversary artwork, as well as «1921-2021» double-dated coins featuring the original 1937 Emmanuel Hahn schooner design. This set has a mintage of 40,000 and retails for $29.95.

For an in-depth look at the history of Bluenose and to learn more about our suite of collector products, visit www.mint.ca/bluenose.  To relive Bluenose’s first International Fishermen’s Cup race, follow @CanadianMint or @MonnaieRoyale as of October 22.

Bluenose collectibles may be ordered as of today by contacting the Mint at 1-800-267-1871 in Canada, 1-800-268-6468 in the US, or online at mint.ca. They are also available at the Royal Canadian Mint’s Ottawa and Winnipeg boutiques, as well as through the Mint’s global network of dealers and distributors, including participating Canada Post outlets.

About the Royal Canadian Mint
The Royal Canadian Mint is the Crown corporation responsible for the minting and distribution of Canada’s circulation coins. The Mint is one of the largest and most versatile mints in the world, offering a wide range of specialized, high quality coinage products and related services on an international scale. For more information on the Mint, its products and services, visit www.mint.ca.  Follow the Mint on Twitter, Facebook and Instagram.

Images of the circulation coin and collector product are available here.